Wybie was rescued from ACS.

Wybie is an incredibly sweet 3 year old tripod. He’s been through so much but that doesn’t slow him down! The first week was hard; he wouldn’t walk, was barely eating, and seemingly giving up hope. But once Wybie realized he was finally out of the shelter and safe, his personality really started to shine through. He started really wanting to practice his walking and eventually stopped letting us carry him out. Over time he even started happy jumping up to greet his foster mom with a wagging tale and a face full of kisses!
His favorite activity is sun bathing in the grass and just enjoying the fresh air. He is such a calm, loving boy, good with cats and dogs and even better with puppies (he will let them just jump all over him, no cares in the world)! He lovesss people and giving everyone kisses, even the vet! He doesn’t mind being leashed even though he really won’t wander far and is okay with car rides as well. He is fully potty trained and okay with the crate but his foster mom secretly lets him sleep on the couch when she’s away from home because he’s such a good boy! He doesn’t bark at all really, never cries and loves to share a bed with his people whenever he’s allowed (LOVES to cuddle you) but is also okay sleeping alone on his bed. He would be a great fit for someone looking for a quiet, cuddly, love bug who likes to stay in or go for rides/sightseeing. He’s honestly just happy being able to keep you company and maybe with a bone or two along the way. 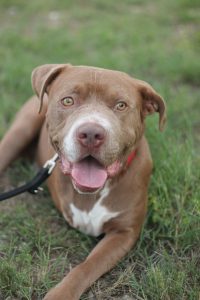